Proper nutrition plays an important role in overall ocular wellness. Certain nutrients have been linked to a reduced risk of developing ocular diseases, including macular degeneration. The human body cannot synthesize the nutrients related to eye health, making nutrition and supplementation a vital part of your wellness plan.

It can be difficult to get the necessary amounts of these nutrients through diet alone. We recommend proper supplementation for our patients who would like to prevent or support treatment of ocular disease through nutrition.

While proper nutrition is key to ocular wellness, it is often difficult to get the nutrients necessary for eye health through diet alone. Supplementation, when done properly, can be a useful tool in the prevention and management of ocular disease. Quality is a key part of proper supplementation, and we prescribe supplements which are held to the highest standards of quality and potency.

Macuhealth
Macuhealth offers dietary support to build and maintain macular pigment – the layer of yellow pigment in the back of the eye which protects the macula from damage. This pigment layer is key in the prevention and management of Macular Degeneration. The macular pigment is made up of 3 key carotenoids: lutein, zeaxanthin, and Meso-Zeaxanthin. Often, individuals cannot build their pigment layers through diet alone and will require supplementation. We recommend Macuhealth to our patients as it contains all 3 of the carotenoids that make up the macular pigment. For the best absorption of Macuhealth, take with a high-quality fish oil – we recommend Pure Encapsulations VisionPro EPA/DHA/GLA. Macuhealth does not interact with other medication, although it does compete in absorption with Vitamin A. We do not advise taking Macuhealth with supplements containing Vitamin A.

Ortho Molecular Ortho Biotic
The gastrointestinal (GI) tract is a carefully balanced environment where 300 different strains of bacteria compete for space and nutrients. When there is a healthy balance, few symptoms exist. However, symptoms and discomfort can occur when an overabundance of potentially harmful organisms prevail. Probiotics have been extensively studied for their effect on the GI environment. They are characterized as having broad health benefits including increasing populations of healthy bacteria in the GI tract and increasing detoxification of harmful compounds. Ortho Biotic is a unique probiotic formula designed to deliver active organisms that have been shown to promote healthy gut flora, protect intestinal integrity and boost immune function.

AREDS Formulation
Since the Age Related Eye Disease Study was published in 2001, an AREDS formula of Vitamin C, Vitamin E, and Zinc has been recommended for the treatment of Age-Related Macular Degeneration. Subsequent studies have proven that the effectiveness of AREDS formula with Zinc and/or therapeutic levels of antioxidants is based on the genetic makeup of the individual and for some, Zinc can actually worsen the effects of AMD. Based on these findings, Dr. Walters does not recommend the AREDS formula for patients who have not undergone genetic testing for AMD. We offer Macula Risk testing in our office, which is a painless test for the genetic markers of Macular Degeneration and also indicates whether zinc with or without therapeutic levels of antioxidants is appropriate in the management of Macular Degeneration based on their genetic profile. If zinc is beneficial Dr. Walters does not advise greater than 20-25mg of zinc.

Blue light, part of the visible light spectrum, has always been present in our environment through sunlight. However, as technology advances, we are exposed to blue light at higher levels than at any point in our history. Blue light is present in energy efficient LED and CFL lighting, fluorescent lighting, and backlit screens, including TVs, tablets, computers, and smartphones. The blue light emitted by LED backlit screens is especially concerning because close proximity of the blue light source to the eye greatly increases the impact of the exposure. 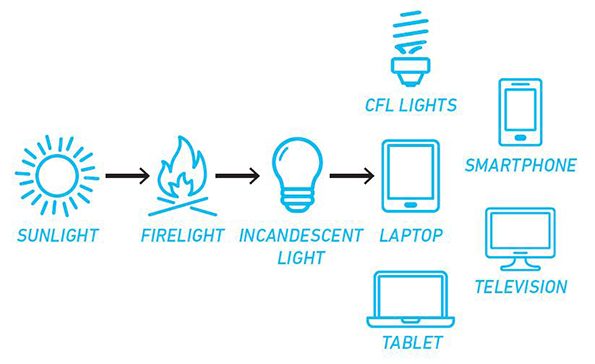 Dr. Walters educates her patients on the importance of limiting blue light exposure. In recent years, overexposure to blue light had been proven to contribute to three major health concerns: eye strain and fatigue, Macular Degeneration, and sleep disruption.

Eye strain and fatigue may be the most commonly occurring complaint from blue light exposure. Individuals who spend multiple hours a day on a computer experience sore, tired eyes, and headaches. Blue light contributes to these symptoms by how the light is focused. After light enters the lens, blue light defocuses in front of the retina, causing visually uncomfortable glare. The eye also has to constantly work to pull the light back into focus, causing eye strain. 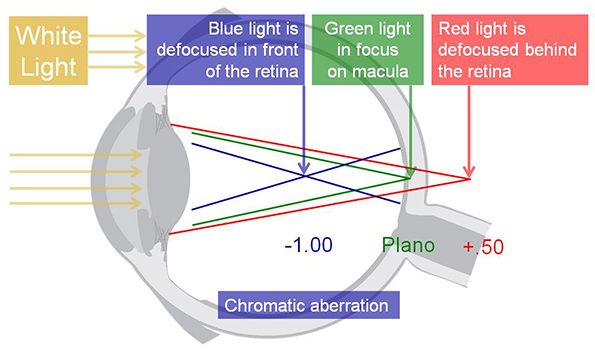 Macular Degeneration, also referred to as Age-Related Macular Degeneration, or AMD, is a progressive disease which can result in the loss of central vision. Historically, AMD has been identified as a disease of the aging population, however increased sources of and exposure to blue light has caused a shift to develop in those affected by this disease. Unlike UV light, which is mostly absorbed by the cornea and lens, blue light penetrates to the back of the eye, damaging the macular and retinal tissue. 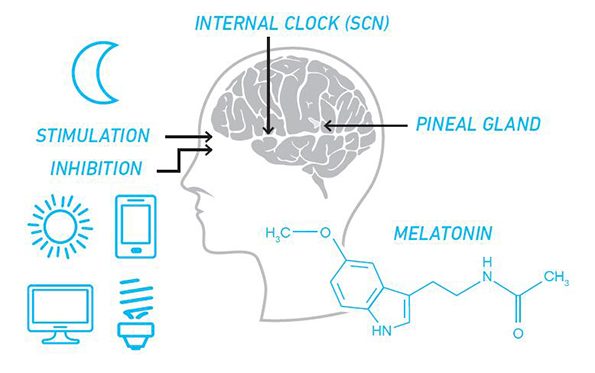 We have a natural filter in the form of macular pigment, which can protect from blue light exposure. This yellow pigment absorbs blue light, allowing for less of an impact on the macula and retina. Over time, extended exposure to blue light can break down this layer, resulting in less protection from the harmful effects of blue light, contributing to the development of AMD.

Sleep disruption is a highly publicized effect of blue light exposure. The human sleep cycle is regulated by light. When the sun is up, we are more alert, and when the sun goes down, we enter a restful state and sleep. This cycle exists because sunlight, which contains blue light, signals the SCN (Suprachiasmatic Nucleus) to inhibit melatonin secretion in the pineal gland. Melatonin, a naturally-produced hormone, allows for the human body to enter a restful state and achieve deep sleep. When the sun goes down, the SCN triggers the pineal gland to produce the melatonin necessary for sleep.

Blue light exposure at night, often from TVs, smartphones, tablets, and computers, disrupt this cycle by invoking the same stimulus response as sunlight, signaling the body that it is time to be awake. This disruption makes it more difficult for individuals to fall asleep and enter deep sleep. 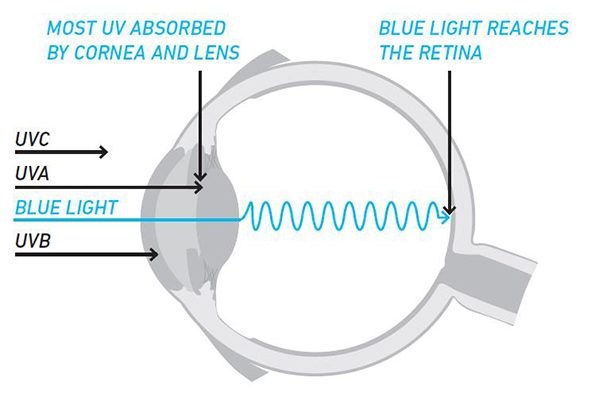 Children are more susceptible to the effects of blue light. Children typically have larger pupils and clearer lenses, allowing more light to enter the eye. Additionally, the macular pigment layer which protects your macula and retina from the effects of blue light does not develop until adulthood. Protective measures for children is even more imperative as consistent blue light exposure is beginning at younger ages.

Controlling your exposure to blue light by limiting your time spent on devices that emit blue light is a step in the right direction. However, in today’s world, it is not always a practical answer to the blue light problem. Our doctors prescribe BluTech Lenses to our patients who have increased exposure to blue light, a lower macular pigment density, are at increased risk of developing Macular Degeneration, or have been diagnosed with Macular Degeneration. These lenses are injected with ocular lens pigment and melanin, which are the natural components within our eyes that filter blue light.

Proper nutrition and supplementation are also key tools in protecting your vision from the dangers of blue light.